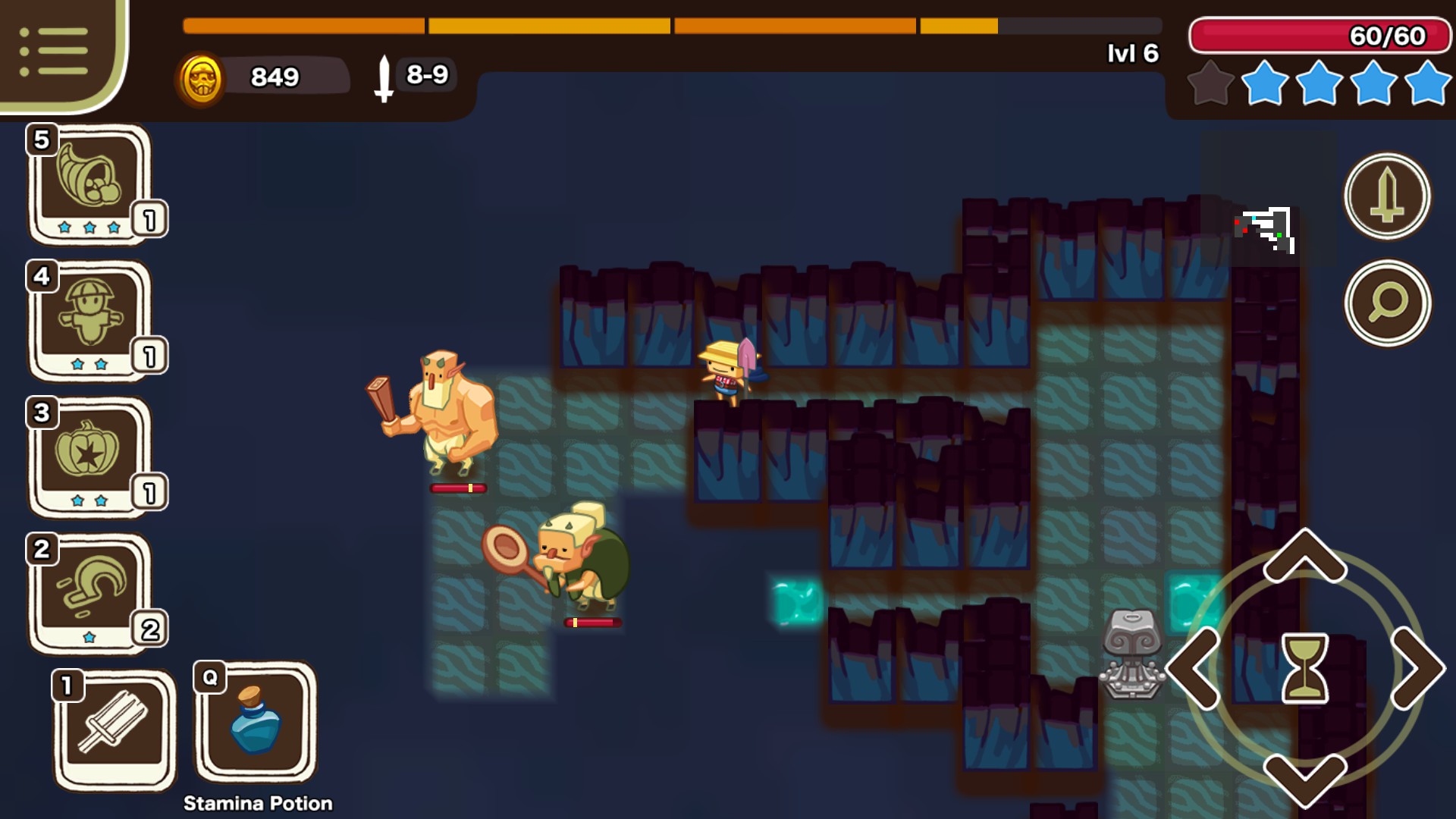 Last night I got to put a few hours into Sproggiwood, a new rogue-like from Freehold Games. You know the drill with me; this is my ‘gut reaction’ post rather than in in-depth review.

I’ve been playing a lot of ArcheAge and some Dragon Age 2 lately; games that are relatively complex. Sproggiwood was a breath of fresh air because it’s an ‘easy’ game to play. I don’t mean it isn’t challenging, I just mean you won’t have to spend much time figuring out the controls or reading tips online. You can play it completely with a mouse if you want to, or you can just use the keyboard (I’m guessing it would be an excellent laptop game and I’ll be surprised if they don’t port it to tablets at some point).

The core gameplay of Sproggiwood is fairly typical rogue-like stuff. You head into a grid-based dungeon and explore it 1 step at a time. Everything is turn based. Enemies move at the same time you do. All movement is orthogonal making it easy to play with WSAD keys. There are a lot of different items to collect and figuring out how they work, and how they work together, is part of the fun.

Your gear consists of three slots: armor, weapon and accessory. Additionally you can carry 1 consumable item. If you find a different consumable you can use it right away, replace the consumable you’re carrying (the old one goes poof), or convert it into gold.

You have two stats: health and stamina. Stamina is used to power skills and it replenishes as you fight. Unlike many rogue-likes, in Sproggiwood health doesn’t replenish with time, nor is there a concept of food.

At least in the early stages of the game dungeons are pretty short. You jump in, fight your way down, leveling up as you go. Each time you level you get a skill point to use in one of 4 skills (each class has a different set of skills). You get to the bottom of the dungeon, fight a boss and then a doorway pops open and you head back to town.

So let’s talk about town. When you first start you play a Farmer. After you clear the first dungeon you get to add a building to your town; the building you choose determines the next class that’ll be unlocked. In my three or so hours of playing I’ve unlocked Warrior, Archer and Thief; there are 6 classes altogether (Wizard and Vampire are the two I haven’t gotten to yet). You can arrange the buildings in your town and build roads and things but as far as I can tell that’s all just decoration.

While in town you can also shop for three classes of products:

First are the three types of town upgrades. Upgrading aspects of your town will help you gain experience faster, start with more health, and get reduced prices in the shops.

Second is gear. You can buy gear for your adventurers so when they head into the dungeon they don’t start with the basic free gear.

Third is consumables that allow your adventurer to start a dungeon with a health potion or a teleport scroll or any of a number of other consumables.

Now here’s the catch: for gear and consumables you can only choose from items you’ve already discovered via opening chests in the dungeon.

Every time you enter a dungeon you’re reset to level 1 (and the dungeon is randomized). Obviously as the game progresses (and there’s a light-hearted storyline to drive you forward) the dungeons get tougher. So here’s your main game-loop. You go into an easy dungeon and fight a boss and discover cool weapons, armor and consumables in the process (discovering them makes them available in the store). You can use these while in the dungeon but they vanish when you teleport out. You also collect a bunch of gold that you then spend back in town on higher quality starter gear to make your adventurer tough enough to take on the next dungeon even though s/he has to start at level 1 again. When you buy gear from the store it’s persistent. Buy a nice sword once and you can choose it every time you enter a dungeon (though all gear is class specific). Even consumables are persistent. If you buy a healing potion once, every time you enter a dungeon you can choose to start with a healing potion.

Now let’s talk about death. Here’s where Sproggiwood is a lot gentler than most rogue-likes. When you die in a dungeon you have to restart it and you’re back to being level 1, but you keep any gold you’ve acquired. There’s one catch: the bulk of your gold (at least at low levels) comes from a 1000 gold bonus you get for clearing a dungeon for the first time with any given class. Still, dying and having a few hundred gold pieces to show for your trouble is better than dying and having nothing to show!

So those are the basics but let’s get to the subjective stuff: Is Sproggiwood any fun?

Yes, assuming your brain is wired in a way that lets you enjoy colorful, turn-based rogue-likes, Sproggiwood is a lot of fun. What I like about it is that it’s accessible. You always read about how awesome rogue-likes are because you die horribly over and over and over but each time you learn some tiny little bit of knowledge that makes you better. That may be true but honestly I don’t often have that much patience. Sproggiwood isn’t as punishing (yet anyway) as most rogue-likes but it still teaches you how to play in ways that are not immediately obvious at first (plus even if you die you get some gold out of the attempt which takes away that ‘wasted time’ feeling of coming out empty handed).

As an example, there are a lot of slimes early on. They come in different colors and when you kill them they leave a blotch on the ground. You’ll quickly learn that green slimes (first encountered in dungeon #2) leave a blotch of poison that causes a few hit points worth of damage if you move over it. So the first ‘tier of knowledge’ is realizing you should lure green slimes out of corridors before you kill them so you’ll be able to walk around their poison blotch. The next tier of knowledge is realizing that other monsters are also poisoned when they walk over a green slime death blotch, and in walking over it they eliminate it. So then you start trying to maneuver the enemies so that you can kill a green slime and the giant behind it will step in that puddle of poison trying to get to you, taking some damage and cleaning up the blotch at the same time. Stuff like that.

Another example. Scattered around the dungeons are pots that you can break to earn coins. Fair enough, I need gold. But then I found armor that gives you 5 health every time you break a pot. That seemed OK but maybe not as good as the +25 HP armor I was wearing since there aren’t THAT many pots laying around. But THEN I found a scroll that turns all monsters in the area into pots! OK now we have an effective combo! Wear that +5 HP/pot armor and carry a ‘turn monsters into pots’ scroll and you have a really effective way of both clearing out monsters and regaining health (and some gold too).

I don’t want to spoil any more of this kind of thing, but for me that’s where the real joy of Sproggiwood comes from. Finding an item or a skill that seems kind of strange and then realizing that combining it with something else makes it pretty potent. Or learning how monsters behave and turning that behavior against them.

I’m enjoying Sproggiwood a lot; more than I expected to in fact. My only disappointment is that the town screen looks like it’s going to have some kind of function, but really it’s just for looks. You keep adding buildings to it, and citizens move in (and say random things) but it’s all just for ambiance, at least in the first few hours. If that changes I’ll update this post.

Sproggiwood is available on Steam or the Humble Store for $14.99.

Disclosure: This post is based on a copy of Sproggiwood provided by Freehold Games.