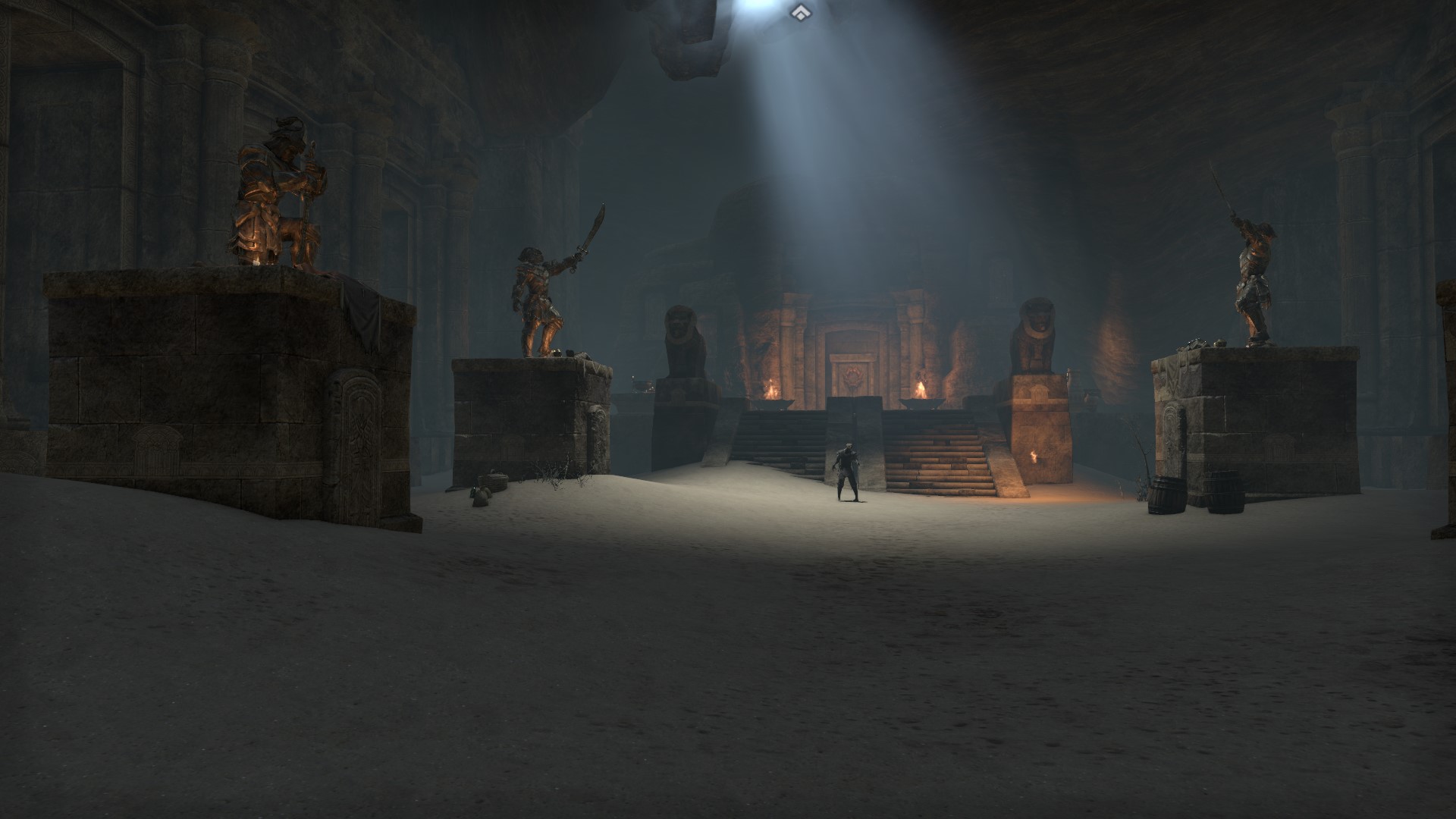 Actually I guess it’s been 5 weeks of playing now, but ‘month’ makes for a better headline. In any event I’ve been playing #TESO for a while now and still really digging it. There’ve been maybe 2 days in those 5 weeks when I didn’t log in, and those weren’t by choice but by necessity.

I’ve seen a lot of hate directed at the game but I don’t understand it; I guess we all want different things from our MMOs. I want a world that feels real, looks real, and has combat that feels great and #TESO gives me all that. Some of the criticism I’ve seen is just based on the imaginations of the haters. For instance I’ve heard complaints about the ‘wall of text’ in quests. Quests are always delivered via a few lines of dialog (see image below). There ARE books you find that are very text-dense but if you don’t want to read them you don’t have to. Just opening them will give you any perk they may offer. But hey, haters gonna hate, right?

I think most of the critics, when it comes right down to it, may be put off by the pace of the game, which can be pretty sedate at times. Particularly folks who are beta-testing the frenetic Wildstar (the pace of which, frankly, exhausts me but I’ll still try it). If Wildstar is the Animaniacs of MMOs, #TESO is the Masterpiece Theater. The rest are people who just don’t like that an online game set in Tamriel exists; they’re the uninformed gamers who think #TESO somehow replaced the next iteration of the single player Elder Scrolls saga (It did not; a new team was put together to create #TESO and the single player Elder Scrolls team is hard at work on the sequel to Skyrim.)

Anyway, ain’t no one got time for dealing with the haters; let’s move on.

My ‘main’ in #TESO is only level 19 (Raptr says I’ve spent 84 hours playing). He has finally ‘finished’ the first major zone (Glenumbra, in his case). I thought I’d finished it last week when his natural progression led him to the next zone, but I checked my Achievements and saw that he’d missed a ton of Skyshards so I retraced my steps to Glenumbra and in the course of tracking those down, found entire villages I’d missed, as well as many mini-dungeons and heroic creature camps. Not to mention that there’s a public dungeon in Daggerfall! Who knew?

Back-tracking actually wound up being a lot of fun; since I was over-leveled I lent a lot of aid to folks trying to take down difficult content. Some of these camps can be tough and can require 3 or more characters of appropriate level to conquer (and even over-level I couldn’t solo some of them) but me and a level-appropriate character did OK. The Public Dungeon was a lot of fun as well; I can’t wait to find more of those. I did Spindleclutch once (the zone’s instanced dungeon) with a PUG that turned out to be a good group of players. In fact in all my time playing the only negative experience I’ve has is from gold spammers and once, someone ran past me to snag a runestone I was going after (but had to kill a mob to get to). Overall it’s been a very positive experience.

All in all I’m having a blast. But there is one issue that has started to impact my enjoyment and it is mostly self-inflicted: alts and crafting. I’d read somewhere that 1 character couldn’t do all the crafting skills (I’m no longer convinced this is true) and of course I had to try them all because I have a crafting compulsion. So I created 2 alts; one to do blacksmithing and alchemy, one to do woodworking and enchanting. My ‘main’ does clothing and provisioning.

#TESO is a little unusual in that your bank is 100% shared between all your characters. On paper at least, this makes it easy to have crafting alts. My main gathers iron, wood, runestones and reagants as he adventures and then tosses them in the bank for the alts to use. He also tosses in gear for the other characters to deconstruct in order to advance. The problem is that your bank inventory space is fixed; when you roll up an alt it doesn’t get any bigger (you can spend in-game coin to expand it but that gets expensive fast). In practice, if you’re a crafting hoarder your bank will fill up really quickly and in my case, I spend a LOT of time logging in and out, shuffling inventory from one character to the bank and then to another characters.

What I need to do is summon the intestinal fortitude to just jettison all this junk (provisioning supplies in particular, and anything I can simply purchase) and maybe abandon all but 1 tradeskill. Then I can spend more time playing and less time shuffling inventory. I’d actually like to play my Woodworker/Enchanter since she’s in a different faction and is an interesting class (Templar) but her personal inventory is stuffed full of Runestones.

Anyway like I said, self-inflicted but if Zenimax decided to give us some kind of ‘reagant bag’ or ‘provisioning bag’ that gave us some extra space to hold these materials, I wouldn’t complain.

Back to the good stuff. Before I back-tracked to Glenumba I started to encounter ‘open world groups’ of PvE foes. I’d heard we’d eventually start encountering groups of enemies but didn’t realize what that meant. I mean encountering more than one mob isn’t all that unusual, right? But what it means is groups of enemies that actually work together. The first time I encountered one of these groups I got my arse handed to me. I went back and tried again and the same thing happened, so I decided maybe I needed to level more.

But as I walked past this pesky group one more time I realized the problem was me, not my character. And I stopped to actually think about the encounter. And so I tried it again. In this case it was a healer, a mage-type and a melee dude (roughly). So rather than just charging in, I hit the mage with my Agony Stun, then charged the healer. Knocked him on his ass and followed up with a life siphon to keep him hurting and me healthy. The melee guy I just kept blocking for now, raining blows on the healer until he succumbed. By then the stun had worn off the mage and he was working up to some kind of nasty spell, but the direct application of my shield to his face put an end to that, and a couple of assassin blades in his liver ended him, leaving just me and the melee dude. 1 on 1 he was no match for me and a few moments later I was walking away with a fistful of gold.

After that I started looking at what I was facing before I charged in, and every fight became a satisfying win or a defeat I learned something from. It’s going to be so hard to go back to an MMO where you just run through the same ‘rotation’ over and over in every open world fight and only in dungeons do you get interesting encounters.

I’m looking forward to doing more exploring of Tamriel. I still haven’t set foot in the PvP zone, and I’ve heard great things about that. I have no idea how many more PvE zones are ahead of me in my journey to level 50, but bring ’em on!

One thought on “A month of Elder Scrolls Online”