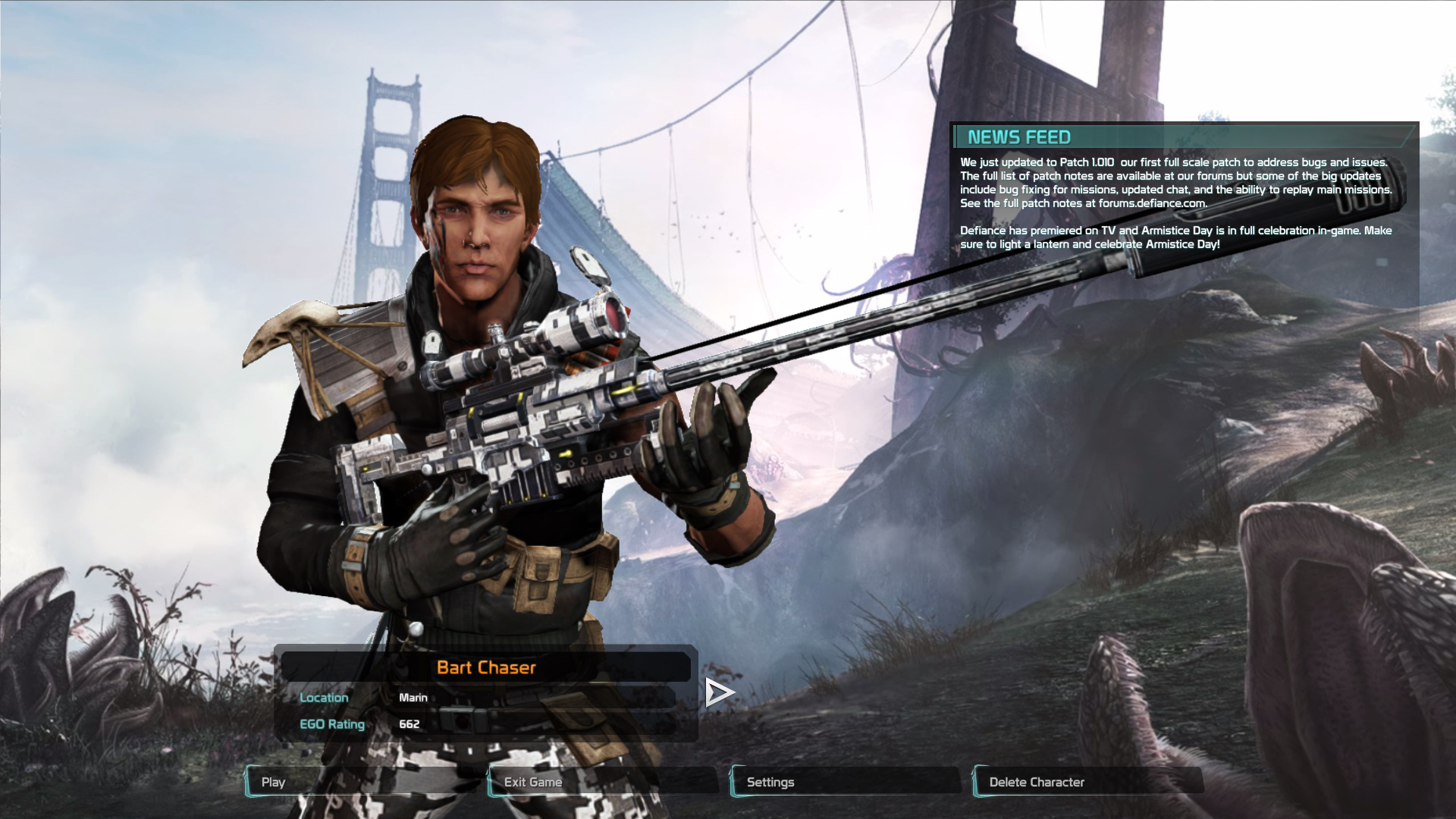 Defiance has been out for 19 days as of today. I don’t think there’s been a day when I didn’t log in, which is pretty unusual for me. Raptr says I’m at 57 hours but for the first few days of launch week I wasn’t running Raptr since I was ‘hiding.’ I was logging in before work and on my lunch hour and didn’t want any co-workers to notice and think I was playing on company time or something (yeah, I’m paranoid). So I’m guessing that my real figure is somewhere around 65 hours.

So clearly I enjoy the game, a lot, but anyone looking at it objectively will tell you its buggy/quirky as hell. Somehow the issues don’t impact my fun significantly, though. This week saw the first major client-side patch, but even though the list of fixes went on and on, the game didn’t feel significantly different when I logged in. Also some new bugs were introduced. I’m looking forward to the next big patch which should be in a couple of weeks.

I play Defiance solo, which means I side-step a lot of the major issues which have to do with chat, both text and voice. Friends who’re trying to put clans together are, I think, experiencing more frustration there. Grouping for missions can be problematic, too. There seem to be 3 types of main missions: open world missions that everyone can jump in and help on, ‘instanced’ missions where you have to activate a portal to enter, and the confusing ones: phased open world missions. With this last type, you don’t see any loading screen or anything, but you can be grouped with someone and you’ll each be in a different ‘universe’ so to speak. The person with the quest will see enemies to fight and objects to activate, the other person will see an empty landscape. This has led to a lot of frustrations among friends who like to Group to play these games. Unfortunately I don’t think this issue is a bug so much as a design decision but I still hope Trion eventually changes things so you can help out a friend in need.

As I said, I play solo, but I don’t play alone, and that’s a lot of what I love about Defiance. I spend a lot of time just helping strangers complete missions; there’ve been missions I’ve done 8 or 10 times by now even though I only ‘had’ the mission once. I don’t really play Defiance for rewards…I don’t play it like a Roll Playing Game. I play it like a Role Playing Game (and to be clear, Defiance is a third person shooter, pure and simple, not an RPG of any sort). So I help people out because that’s what heroes do! And I’m trying to be a hero this time around.

Then there are the massive ArkFall events, which I find fun now and then. They’re not my favorite aspect of Defiance since they start to feel pretty generic after a while. And last night I did my first Co-op Mission via the Matchmaking feature, which put me in a PUG. It was surprisingly fun, but when the leaderboard came up and I saw I came in 4th I felt like I’d only held the team back. In my dubious defense, they all seemed to know where to go and what to do so that may have hampered my efforts somewhat.

Earlier this week, Defiance the TV Show premiered. I enjoyed it quite a bit and I’m looking forward to more. I was expecting actual Episode Missions to debut in-game after the show aired, but instead we got Episode Pursuits. Pursuits are essentially clusters of Achievements. “Find these 4 items, kill 10 of that kind of enemy, do this mission.” These “Episode Pursuits” are only in-game for a limited time, so I felt a lot of pressure to complete them quickly. Since one of them revolves around completing events that spawn randomly, it meant (for me at least) 3 nights of driving around semi-aimlessly, completing random events to ‘clear them’ so the ones I needed would pop. This was, by far, the least amount of fun I’ve had in Defiance and for the first time since the game launched I found myself logging out frustrated and looking for something else to do. Last night I finally finished them (well, all of them except for the one that involves PvP…I’m no PvPer) so hopefully I can get back to the good stuff.

In a Raptr Q&A earlier this week, Trion mentioned a few times that since so many people are frustrated by having time-limited content, they might decide to just leave it in. They were talking more about the Episode Missions that were in game from April 2nd – April 15th before being removed, but I hope they do the same thing for these Pursuits. They would’ve been more fun if I felt like I could’ve searched a bit, then gone to do something else, then searched a bit more at a later date.

Anyway I also hope we see more actual Episode Missions in weeks to come. Pursuits are a nice ‘side line’ activity but I love the real missions. Speaking of which, at 60-ish hours and EGO rating of 650 or something, I still haven’t finished the main storyline. I keep getting distracted by helping strangers and doing side-missions, which is weird because I’m actually enjoying the storyline quite a bit.

Trion seems committed to Defiance (and they sound as frustrated as the players are with the number of bugs and issues) so I’m hopeful the game will have a long life. 5 DLC packs are planned and they’re scheduled to roll out between Seasons 1 & 2 of the TV series. (I got this info from the Raptr Q&A.) At that point Trion gets to move the story forward on their own, and I’m looking forward to seeing what they come up with. While the DLC will have a paid component, my understanding is that all the world content (which I assume means the story stuff) will be free to everyone since Trion doesn’t want to fragment the playerbase.

Free is always good but I’m wondering how they’ll sustain the game financially. There’s no subscription fee. There’s a cash shop but nothing in it seems all that compelling. I did buy some ‘Bits’ (the cash shop currency) to expand my character’s inventory space but nothing else is really calling to me. Anyway, hopefully they have some ideas; I’m sure they’re pretty much 100% focused on killing bugs and polishing rough spots for now.

Anyway, so that’s what I’ve been doing the past few weeks. Defiance, Defiance and more Defiance, with a short break to watch Defiance. LOL I’ve even had to set Fire Emblem aside since I keep getting to bed much too late (Fire Emblem has been ‘play a mission before bed’ game until Defiance came along). It’s still buggy so I’d still suggest that if bugs make you crazy you should continue to hold off, but I’m having more fun than I’ve had in years.