I don’t usually do commentary on news items, but this one really caught my eye. An Associated Press article on CNN ( NYC health board bans trans fats at restaurants) reports that the New York City health board has instituted a ban on the use of trans-fats in restaurants. They have to switch over to non-trans-fat fryer oil by July 2007 and have a year after that to totally elliminate it from their kitchens. 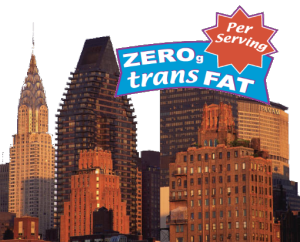 I’m just dumbfounded by this. Granted, trans-fat is bad for you, but so is alcohol and remember how well the last ban on that went over? What’s next, do you think? Salt? Jalepeno peppers? Because they can cause heartburn, you know. The article tries to infer a parallel between this ban and the ban on smoking in restaurants (which NYC was an early adopter of) but these are totally different things. If you choose to eat a heaping plate of french fries at the next table, I don’t have to eat second-hand-fat because of your choice.

And it’s always amusing to read the “I don’t want to be a parent so let’s let the government be one for me.” quotes:

It’s the danger a bad diet poses to children that has experts the most worried. It’s also what worries Kathy Ramirez, a 26-year-old New York mother who takes her toddler to McDonalds every week. She approves of the ban and a related measure passed Tuesday, requiring restaurants that already disclose calorie counts — mostly chain restaurants — to post them right on the menu.

“It’s hurting us, all this fat, but the kids really like it,” said Ramirez, pointing to 3-year-old Amber, who’d just finished her dinner. “It would be better to know what we’re getting.”

Here’s a crazy idea, Ms. Ramirez… if you don’t want your kid eating fatty food, don’t take her to McDonalds every week!!! Oh, but I see… she really likes it. Maybe in a couple of years she’ll really like tequila, and you can take her out for shooters every week. For her seventh birthday you can let her eat the worm.

OK super-cynical mode off. I read not too long ago that Dunkin Donuts was struggling to find a replacement for the oil/grease/lard/whatever that it uses to make its donuts and wasn’t have any luck at all. All the non-trans replacements left the donuts greasy or soggy or tasting bad. So getting rid of this stuff is, I guess, not trivial. It’ll be interesting to see what alternatives restaurants come up with, and what impact those alternatives end up having on the taste buds and gastric systems of New Yorkers.