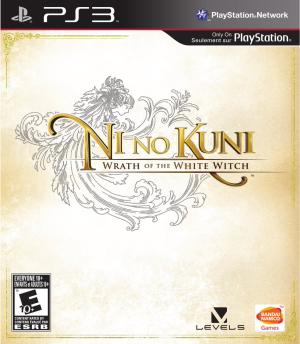 The Level-5/Studio Ghibli collaboration Ni No Kuni: Wrath of the White Witch, has been out for a week as of today. It’s been my main gaming focus since it arrived last Tuesday evening and I thought it was time to share some thoughts. I’ll try to avoid any major spoilers but you may be able to work out when certain game systems unlock. I’ll try to stay as vague as possible. As of last night my main character was around level 20 and I’m somewhere in the 15-20 hour range.

When I first booted up Ni No Kuni my jaw dropped. It is a gorgeous game with a killer soundtrack. Early on in the game you get lots of FMV cut-scenes animated by Studio Ghibli and it feels like you’re playing an anime. I’m using the English voice talent and they’ve been pretty good so far. Little Oliver (the main character) shouts “NEATO!” a bit too often for my tastes but that’s really nit-picking. For the first evening I played Angela was happy to sit next to me and just watch the game. It’s one of those kinds of experiences.

Sadly that richness doesn’t last and pretty soon you’re in a typical (though still beautiful) JRPG, running from battle to battle to level everyone up. The FMV stuff takes a back seat to button-press driven text conversations. That’s not necessarily a bad thing: this is a game, not a movie after all. But personally I could use a bit more animation.

Ni No Kuni is filled with lore, much of it delivered via an in-game manual called The Wizard’s Companion. In addition to practical information about the game world it has a ton of ‘flavor’ info including some fables from this land. I’ve really enjoyed browsing through the Companion and I even took the time to decipher some of the runes sprinkled through it (yes, the Ni No Kuni designers went so far as to develop an alphabet for this world). For gameplay questions you can turn to The Answering Stone which helps you out with questions you have about the actual game mechanics. So much more fun than just a plain help menu.

The main focus of Ni No Kuni is collecting and developing Familiars. The main character, Oliver (you can re-name him if you like) is a young boy who (so far at least) always uses a wand. In practice most of the time you’ll be controlling one of the many Familiars that he can take into battle. These creatures cover all kinds of play styles; your first one is a sword and board fighter for instance. Others lean towards magic using, either offensive, support, or healing. Human characters like Oliver (and the friends he eventually makes) can ‘equip’ up to 3 Familiars each. A few more can be carried in inventory and swapped out between battles. Finally there’s a Familiar Shelter that can hold up to 400 (!) of the creatures.

A Familiar can be customized/progressed in several ways. First they level up and gain new abilities. At certain times they can metamorph into a new form by using an item. From Form 1 to Form 2 is a fixed change, but from Form 2 you can choose from two versions of Form 3 (I haven’t gotten this far yet). When a Familiar changes forms he returns to level 1 and has to be re-leveled but he is potentially more powerful. You can also feed a familiar Treats to improved specific stats. Ice Cream might increase magic defense while chocolate increases physical offense, for example. There seems to be a limit of +10 points in this stat buffing system. [Update: Thanks to Wiqd for pointing out that this limit is tied to a Familiar’s Familiarity rating with you… it can go higher once you’re better frineds with them.] And finally, Familiars can be given gear to improve their abilities. Some use Swords, others use Fangs or Claws. Some use Shield and some used Cloaks…and so on.

In practice what this all boils down to is lots and lots of leveling. I generally have 2 Familiars equipped to fight with and one per/character that is along for the ride getting free experience and it isn’t unusual for someone or something to be leveling up after every battle. In general I like leveling characters, thank goodness.

The problem, for me, is that I’m not finding the combat all that satisfying and as is typical in an JRPG there’s a LOT of combat. During a fight you can control one entity. That can be Oliver or one of his friends, or it can be a Familiar. Only 1 Familiar per character can be on the battlefield at a time, and the human characters share their health and mana pools with their Familiars. I’m finding that the mana pools are pretty small which means I’m doing a lot of melee combat and mostly just clicking Attack over and over for random battles.

Boss Fights are much more interesting. They go on for long enough that you’ll have to swap out Familiars (they get tired as a battle rages on) or pop onto your Human characters to use items. However I find the whole process of changing characters to be kind of awkward and in general the battle system feels more frantic than I’d like. I don’t mind action-combat and I don’t mind turn-based combat but Ni No Kuni feels like “frantic menu selection” combat that just leaves me feeling kind of frazzled.

Once you have a 2nd human character in your party you can assign tactics to the AI. These are fairly ‘coarse’ assignments and the AI isn’t at all smart about conserving resources. So if you tell a friend “Keep us Healed” that friend will spam heals and be out of mana in no time. I really miss being able to say, y’know, “If my health drops below 50% heal me.” You can change tactics in the middle of a battle but it takes a long time to do and means you’ll miss at least one attack in doing so.

So yeah, this isn’t my favorite combat system ever. I don’t hate it, but it’s not my favorite. And there’s a lot of combat. So that’s wearing on me a little, but I think there’s more that’s bothering me about Ni No Kuni.

Part of it is Oliver. When I play an RPG in some sense I’m always trying to RP the main character. But Oliver is a 10 year old boy and there’s not a lot in him for me to relate to. So I remain an observer to the action. Also the Familiars are all very cute. If you find a bad-ass sword and give it to your familiar…he’ll still look very cute. His appearance doesn’t seem to change except when he advances in form. These aren’t faults with the game; they’re just aspects that don’t sit well with me, personally. I really like for a game to visually reflect my character’s advancing levels/bad-assitude.

The other issue I have is with pacing. After a brisk start the story just bogs down pretty quickly. There are a lot of side-quests you’ll want to do in order to level up your Familiars (and earn some perks for Oliver) but none of them are very compelling. There’s this heart system where you have to borrow some ’emotion’ from one character and give it to another (this guy needs courage, that gal has a ton of courage, let’s borrow some from her) which seems really cool at first but then you realize these are just FedEx quests really. The characters who have ‘heart’ to spare are indicated on the map so you just run and find the one who has the aspect you need, click through a conversation to get some goodness, and go dump it on the quest-giver. Other sidequests are of the Kill Ten Rats variety, or collect 5 pelts. You know the drill.

So that’s where I stand. After my first night of playing Ni No Kuni I probably would’ve called it a 9 or 10 out of 10 game, but after a week of playing I’m thinking it’s more of a 7 or so. It’s still a solid, lengthy JRPG with lots of leveling and sub-systems like Crafting (via Alchemy) and tweaking Familiars via treats. But while the game is beautiful to look at, there’s nothing really revolutionary here and the story is dribbled out to us at such a slow pace that it kind of loses impact.

I think part of my problem is I’m focusing on it too heavily. I think I need to mix in some other games while playing Ni No Kuni. That’s how I’ve been playing Harvest Moon and it’s helping me to really enjoy that game. Fire Emblem comes out next Tuesday and that might be just the ticket to breaking up the grindy parts of Ni No Kuni.

I’m surprised that Ni No Kuni: The Wrath of the White Witch has been getting such awesome reviews, to be honest. I’m wondering if I’m the only one feeling slightly disappointed in it. I mean I really WANT to love it, and for a few days I was lying to myself about loving it, but the truth is that while I do absolutely like it, that’s as far as we go. Me & Ni No Kuni are just good friends. I have no regrets about buying the game but (unless things change in the latter parts of the game) it’s not going to end up in my list of all-time favorite games or my personal ‘game of the year’ awards or anything like that.